This post is another attempt on explaining the M word in an approachable way. This explanation will best suite C# developers who are familiar with LINQ and query expressions. However, if you are not familiar with C# but would like to learn how powerful and expressive some of its features are, please read on!

Recap of LINQ and query expressions

LINQ is a technology introduced in C# 3.0 and .NET 3.5. One of its major applications is processing collections in an elegant, declarative way. Here’s an example of LINQ’s select expression:

Query expressions are one of the language features which constitute LINQ. Thanks to it LINQ expressions can look in a way which resembles SQL expressions:

Before LINQ you would need to write a horrible, imperative loop which literates over the numbers array and appends the results to a new array.

Thanks to type inference in generic method calls and the static usingfeature we can now simply write:

Since we’ve already discussed how select would work on Maybe, let’s implement it! Adding support for query expressions to your custom types is surprisingly easy. You just need to define a method which confirms to a specific signature (it’s an interesting design decision by C# creators which allows more flexibility than requiring the type to implement a specific interface).

What’s going on here? Firstly, let’s take a look at the signature. Our method takes a function which transforms the value contained by Maybe to another type. It returns an instance of Maybe containing an instance of the result type. If it’s confusing, just replace Maybe with List or IEnumerable. _It makes perfect sense to write a _select expression which transforms a list of ints to a list of strings. It works the same way with our Maybe type. 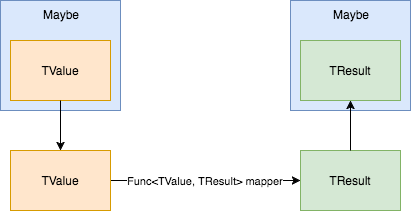 Now, the implementation. There are two cases:

Let’s give it a try:

Nice! We can now use select expressions with Maybe type.

Taking it one step further

Let’s now imagine that given an employee’s id, our goal is to return the name of theirs supervisor’s supervisor. A person can but does not have to have a supervisor. We are given a repository class with the following method:

And a Person class:

Can we improve this code with our new Maybe type? Of course we can! First of all, since Maybe represents a value which may or may not exist, it seems reasonable for GetPersonById to return _Maybe<Person>_ instead of Person.

Next, let’s modify the Person class. Since a person can either have or not have a supervisor, it’s again a good fit for the Maybe type:

Given these modifications we can now rewrite GetSupervisorSupervisorName in a neater and more elegant way:

Why is this better than the previous version? First of all, we explicitly represent the fact that given a person, the method might or might not return a valid result. Previously, the method always returned a string. There was no way to indicate that it can sometimes return null (apart from a comment). A user of such a method could forget to perform null check and in consequence be surprised by a runtime error. What’s more, we avoid the nesting of if statements. In this example we only go two levels deep. What if there were 5 levels? Code without these nested if statements is much cleaner and more readable. It expresses the actual logic, not on the boilerplate of null-checking.

If you’re copying these snippets to Visual Studio, you might have noticed that the last one won’t compile. By implementing Select we told the compiler how to apply functions to values inside Maybe instances. However, here we have a slightly more complex situation. We take a value which sits inside a Maybe instance and apply a function to it. As a result we get another Maybe instance, so now we have a Maybe inside a Maybe. The compiler doesn’t know how to handle this situation and we need to tell it by implementing SelectMany. 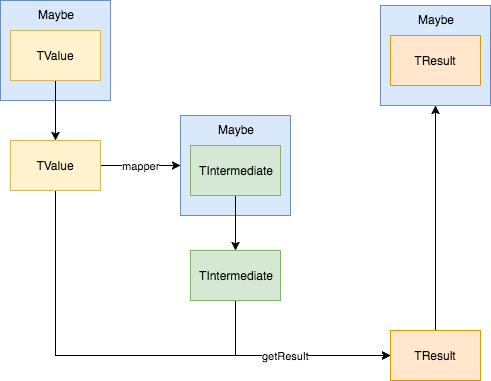 Ok, so what’s exactly a Monad?

Monad is any generic type which implements SelectMany (strictly speaking, this is far from a formal definition, but I think it’s sufficient in this context and captures the core idea). SelectMany is a slightly more general version of an operation which in the functional programming world is referred to as bind. Monadic types are like wrappers around some values. Binding monads is all about composing them. By wrapping and unwrapping of the values inside monads, we can perform additional operations (such as handling empty results in our case) and hide them away from the user. Maybe is a classic example of a monad. Another great candidate for monad is C#’s Task<T> type. You can think of it as a type that wraps some value (the one that will be returned when the task completes). By combining tasks you describe that one task should be executed after the other finishes.

I hope this article helped you understand what monads are about. If you find this interesting, check out the F# programming language where monads are much more common and feel more natural. Check out this excellent resource about F#: https://fsharpforfunandprofit.com/. It’s also worth mentioning that there exists an interesting C# library which exploits the concepts I described in this article: https://github.com/louthy/csharp-monad. Check it out if you’re interested.