Entity Framework is an ORM technology widely used in the .NET world. It’s very convenient to use and lets you forget about SQL… well, at least until you hit performance issues. Looking at the web applications I worked on, database access usually turned out to be the first thing to improve when optimizing application performance.

The main goal of Entity Framework is to map an object graph to a relational database. Tables are mapped to classes. Relationships between tables are represented with navigation properties. 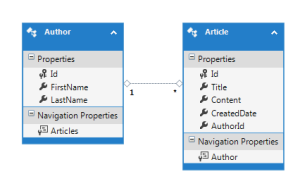 The above example will be mapped to the following classes:

Assuming that ViewBag.Articles is loaded with the below method, this code might turn out to be very slow.

Unfortuantely, it will fire a separate SQL query to the database server for each element in the Articles collection. This is highly suboptimal and might result in long loading times.

The reason behind this behaviour is the default setting of Entity Framework which tells it to load navigation properties on demand. This is called lazy loading. One can easily overcome this problem by enabling eager loading:

Eager loading will cause EF to pre-load all Authors for all selected Articles (effectively, performing a join). This might work for simple use cases. But imagine that Author has 50 columns and you are only interested in one of them. Or, Author is a superclass of a huge class hierarchy modelled as table-per-type. Then, the query built by EF would become unncessarly huge and it would result in transfering loads of unnecessary data.

One way to handle this situation is to introduce a new type which has all Article’s properties but additionally has some of the related Author’s properites:

Now we can perform projection in the query. We will get a much smaller query and much less data transfered over the wire:

We improved performance, but now the code looks much worse - it involves manual mapping of properties which is in fact trivial to figure out. What’s more, we would need to change this code every time we add or remove a field in the Article class. A library called Automapper comes to rescue. Automapper is a convention-based class mapping tool. Convention-based means that it relies on naming conventions of parameters. For example, Author.FirstName is automatically mapped to AuthorFirstName . Isn’t that cool? You can find it on NuGet. Once you add it to your solution, you need to create Automapper configuration:

You need to add one more line:

And that’s it. You’ve just improved readability of your code and made it less fragile to changes.

Automapper is a very flexible tool. You don’t need to rely on naming convensions, you can easily declare your own mappings. Additionally, we have just used just a specific part of Automapper - Queryble Extensions which work with ORMs. You can also use Automapper on regular collections or just on plain objects.

I believe the problem I highlighted here is just a symptom of a much broader issue of incompatibility of relational and object oriented worlds. Although Entity Framework tries to address the issue by allowing to choose between eager and lazy loading, I don’t think it is a good solution. Classes managed by EF being elements of a public API are a big problem. As a user of such interface you never know if a navigation property is loaded and whether accessing it will result in a DB query.

Therefore, I advocate the use of mapped DTOs. This approach reminds me slightly of an idea called Functional Relational Mapping adopted for example by the Slick framework for Scala. I believe it to be a great alternative to classic ORMs. Some references: