Setting up coverage reports on TFS with OpenCover 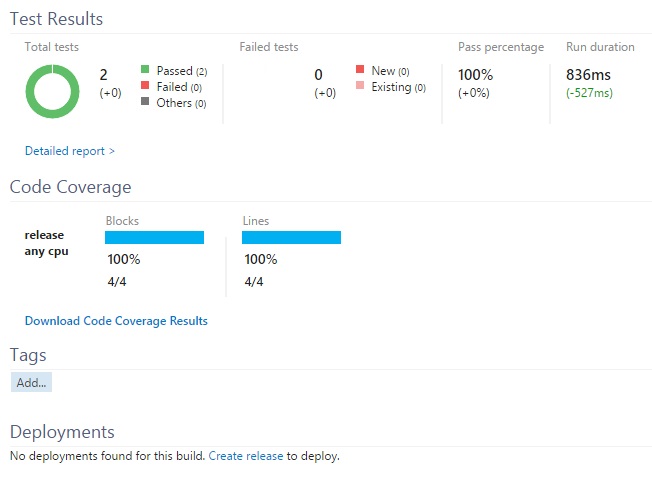 UPDATE 2: Christian Klutz has created a VSTS task based on this article. You may want to check it out. Unfortunately, I won’t be able to offer any help on the topic since I haven’t been using TFS for some time.

We are going to put some files on TFS. We will need:

The last three items are available as NuGet packages. I suggest organizing all these files into the following directory structure:

Once done, check it in to your TFS instance. I’ve put the BuildTools directory on the top level of the repository. Next, I’ve added a mapping to my Build Definition in order to make that directory available during the build.

Let’s now write the PowerShell script. The script is going to perform a couple of steps:

The script will take a couple of parameters as input:

Next, let’s run the Find-Files utility to search against the pattern defined in $testAssembly. This code is copied from the original Run Visual Studio Tests task source code.

We can finally run OpenCover. The command to do this is pretty complicated. OpenCover supports different test runners (VSTest being only one of them) so we need to specify the path to VSTest as one of the arguments. The path below (%VS140COMNTOOLS%..\\IDE\\CommonExtensions\\Microsoft\\TestWindow\\vstest.console.exe) is valid for Visual Studio 2015 installation. Another important argument is -mergebyhash . It forces OpenCover to treat assemblies with the same hash as one. I’ve spent a few hours figuring out why my coverage score is so low. It turned out that OpenCover analyzed few copies of the same assembly.

Next, let’s convert the results generated by OpenCover to Cobertura format.

Finally, we will generate a HTML report based on the results from OpenCover.

We will need to add three build steps to our Build Definition. If you have a Visual Studio Tests task in it, remove it - you will no longer need it.

And that’s it! Run the build definition and enjoy your code coverage results. You can find the on the build summary page. The HTML report is available as one of the build artifacts.