I’ve been writing a lot about specific functional concepts and their implementation in JavaScript and TypeScript. In this article, I’d like to show you how to put some of these ideas together and create a working application based on functional programming principles. The application we’re about to build is called Functional Climbs. It presents a list of climbing routes and allows the user to mark some of them as completed.

I’m not going to use any framework but there will be some helper libraries involved. The source code is available here.

Every application has a state. It can be distributed across fields in multiple objects (components, controllers, etc.) or it can be centralized. In the centralized approach, the state is an object that stores the information the application needs to function. In our case, the state will contain an array of objects, each one representing a climb.

Feel free to extend the list and add some more climbs!

From State to View

Now that we know the structure of the state, it’s time to create a function that produces a DOM tree based on the state. Since we’re doing functional programming, this function should, of course, be pure. How to create the DOM tree in a functional way? The standard DOM API is not very functional - it relies on global objects and mutations. Instead, we’re going to use two libraries - hyperscript and hyperscript-helpers. Hyperscript makes it possible to create DOM trees in a declarative way. Instead of manipulating nodes you simply declare what you’d like the document to look like:

If you don’t feel like using JS functions instead of HTML, you can achieve the same results with JSX.

The role of the view function is simple - it has to translate state into a DOM tree by calling various hyperscript-helpers functions. Most of these functions accept three parameters:

It’s a good idea to break down the view function into smaller functions representing different components of the UI. You might put the implementation of this function inside a separate view.js file. Let’s take the top-down approach and start with the root function. We separate climbs into two arrays representing completed and remaining climbs. Next, we use the climblist component to display them. CSS classes are referring to Bootstrap.

Component climblist is simply an HTML table. We map every climb inside the state to climblistRow component. As an exercise, you can add a static table header to this function!

Finally, climblistRow consists of cells containing data from climb objects. The last column contains a button that will toggle “completeness” of a climb. For now, it will not do anything.

You are now ready to put the view function into action. Create an index.html file with the following body:

Now all you need to do is to run view function on initialState and attach the result to the root node. Create and index.js file with the following content:

To make this all work together you will need a module bundler. Check out the webpack config in the source code. When you launch the application you should see a table displaying climbs defined in the initial state.

Let’s have some action

So far our application is rather boring. Toggle buttons don’t do anything interesting. It’s time to change it! As you know, the most important part of the application is the state object which is the golden source of truth. So if we want something to happen then we need to modify the state. But hey, it’s functional programming - we can not mutate the state! Instead, we will return a fresh, updated copy of the state and re-generate the DOM based on it. Let’s create a function called reducer which takes a state object and an action object and returns a new state object. But what’s the action object? It’s simply a piece of data representing some event in the application. We will only have a single action that will be triggered when the user clicks on the toggle button. It has to store the id of the climb that is being toggled. Let’s create actions.js file with the following contents:

It’s a common convention to have these two fields inside action objects. type determines what action is it and payload contains details of the event. In our case payload is simply climbId but it could be any object. Next, we will write the reducer function. Given the state and the TOGGLE_COMPLETED_ACTION action, it needs to return a new state object where the climb with provided id is replaced with a new climb object with completed field flipped.

Note how we make sure not to mutate the state object. Spread operator and map method are pretty useful in this scenario. Next, we need a way to trigger this new action. Let’s assume for now that view function accepts another parameter called dispatch. It will be a function and it will be used to trigger actions. We need to pass this parameter all the way down to climblistRow component where it can be hooked to onclick property of the toggle button.

Make sure to put dispatch as the first parameter of all view functions. It will allow you to do partial application using curry function (which you can get from Ramda).

Putting it all together

It’s time to create some machinery so that action results in DOM updates. This is the only impure fragment of the codebase! Replace the contents of index.js with the following code.

The app function applies provided state object to the DOM. What’s more, it defines the dispatch function which is used to trigger actions. This function uses reducer to apply the action on existing state and recursively passes the new state object to app. Finally, we call app with initialState. And that’s it! Run the application and try out toggle buttons - they should work now. 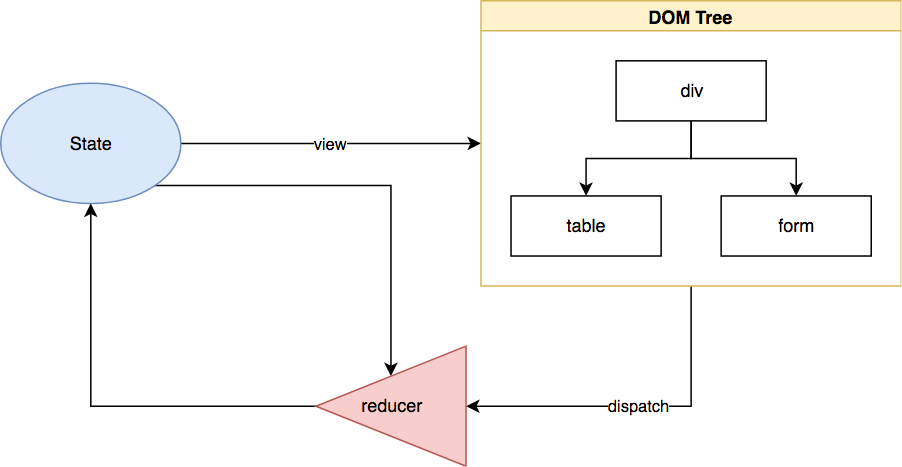 You’ve just created a working application which is as functional as it possibly can. Of course it has some impure parts - every application should have some side effects, otherwise, it wouldn’t be very useful! The trick is to minimize and isolate the impure parts. For those of you familiar with Redux or MobX this approach can feel very familiar. Indeed, we’ve implemented a simplistic version of a state management framework. I totally suggest using a real framework instead but for educational purposes, it’s a good idea to see how it works underneath. You might have concerns about performance. Re-creating the whole DOM on every tiny state change doesn’t sound optimal. The answer to this is virtual DOM. There are libraries that allow you to create virtual DOM nodes that can later be compared and only small, incremental changes to the DOM are executed. This is exactly how React works! hypescript-helpers are compatible with some virtual DOM libraries. I hope the article was clear enough and that now it’s clearer how to apply functional programming principles in real life!